In accordance with the NISSIN FOODS Group Compliance Regulations, a compliance manager is appointed in each main division of NISSIN FOODS HOLDINGS and each Group company. In principle, the Compliance Committee, which is chaired by the CSO (Chief Strategy Officer) of NISSIN FOODS HOLDINGS, meets quarterly.
Compliance Committee members share reports made to internal whistleblowing systems, trends in consultation, and examples of issues that have occurred. In addition, members also investigate measures to prevent the occurrence of problems. The compliance managers investigate and report on violations in their respective organizations. Those managers share details of reports at Committee meetings, and hold compliance study meetings as well.
The Board of Directors regularly deliberates on the system, state of implementation, and related issues of compliance, and supervises the business execution of the Compliance Committee and relevant departments. 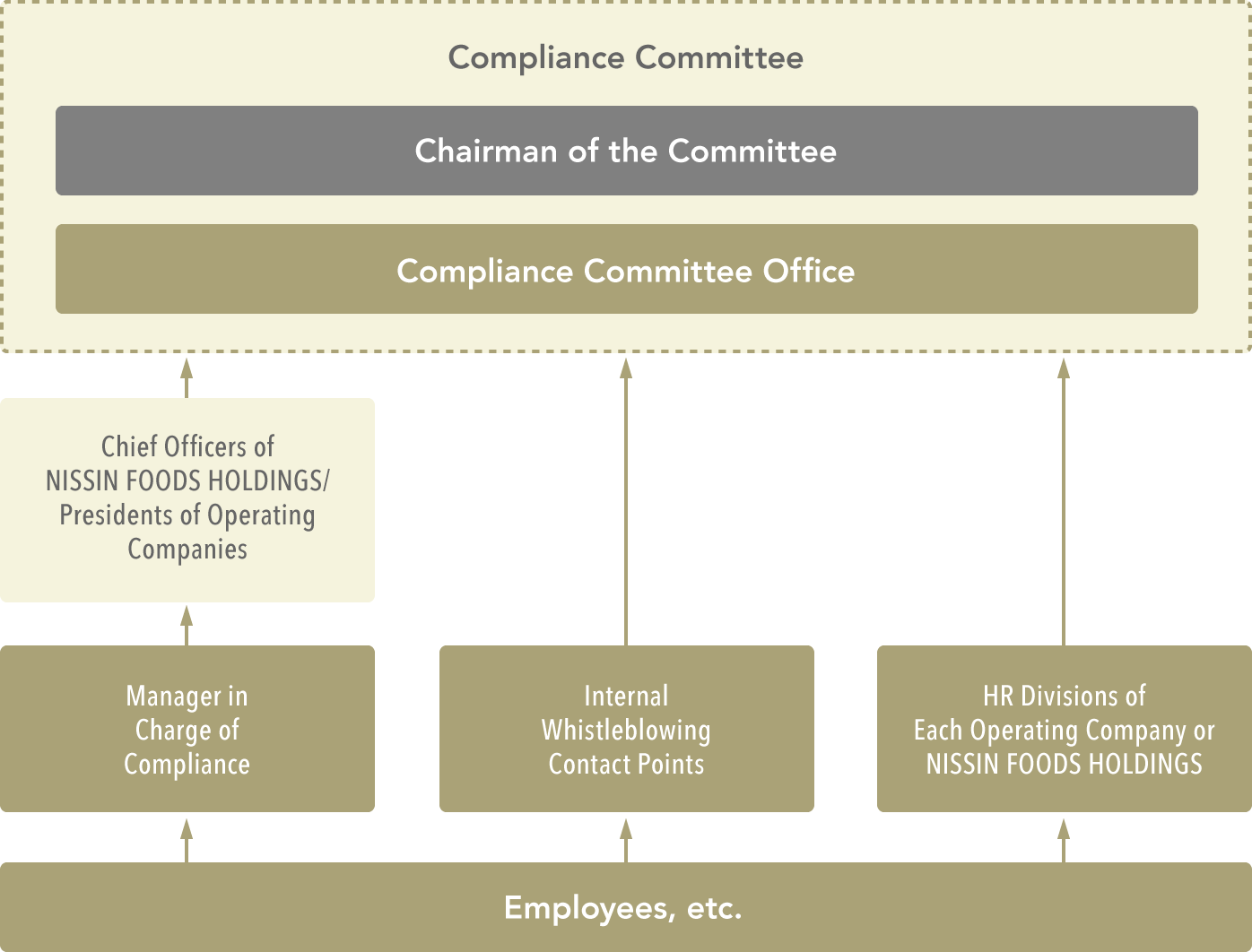 In addition, all forms of harassment behavior—such as workplace bullying or abuse, which is called “power harassment” in Japan and sexual harassment—based on gender, status, authority, and other factors that hurt the dignity of individuals are prohibited by the Code of Conduct of the NISSIN FOODS Group Ethics Regulations. Violations of the NISSIN FOODS Group Ethics Regulations, either intentionally or through gross negligence, will be severely dealt with (such as disciplinary dismissal, demotion, suspension, and pay cut) based on the employment regulations and other rules of the respective Group companies.

NISSIN FOODS Group Ethics Regulations Code of Conduct (excerpt)
・Employees shall support internationally recognized human rights protection standards and respect the basic human rights of all people. They shall not conduct any actions that impair the dignity of any individual.
・Employees shall not discriminate against anyone on such grounds as nationality, ethnicity, religion, gender, age, social status, disability or the like.
・Employees shall not engage in harassment based on the status, authority, gender or any other factor.

Training for all employees regarding discrimination and harassment at the workplace

To raise compliance awareness, the Compliance Book is distributed to all NISSIN FOODS Group company employees in Japan. The Book contains information on topics such as relationships with suppliers, information management, and sexual and other forms of harassment as well as case studies on laws, regulations, and social norms that must be observed. In addition, compliance training is conducted annually. In fiscal 2020, training to prevent power harassment using actual examples and training for directors by inviting lecturers were also conducted in fiscal 2020.
Compliance topics and information on internal whistleblowing systems are also incorporated into various training curricula including training for entry-level employees and new managers. In addition, methods for handling consultations from employees are also taught during training for new managers.
Each year, a compliance awareness survey is conducted for all Group employees in Japan. The survey includes questions on the status of compliance with laws, regulations, and corporate ethics, and the results are used by the Group to determine changes in employee awareness.

At the NISSIN FOODS Group, internal whistleblowing contact points have been established for the early discovery of violations—such as those related to laws and regulations and internal regulations—to prevent misconduct and to improve the soundness of management.

In addition, the following confidentiality obligations are established in the Internal Reporting Regulations.

Whistleblowing details and examples of response in fiscal 2021
・Whistleblowing details
Power, sexual and other types of harassment
・Response measures
Of the whistleblowing cases we received, we properly implemented surveys of cases that we determined warranted looking into. Of these cases, necessary disciplinary action was taken to punish wrongdoers in cases where serious compliance violations were confirmed.

Number of Compliance Violations in Fiscal 2021 (Target: Group companies in Japan)
Number of Code of Conduct or legal violations related to anti-corruption: 0