The NISSIN FOODS Group has formulated EARTH FOOD CHALLENGE 2030, our environmental strategy until FY2031, and set CO2 emission targets of a 30% reduction in total Scope 1 and 2 emissions in Japan and overseas compared to FY2019 as well as a 15% reduction in Scope 3* emissions. (Refer to Environmental Management System for details on progress). These targets are recognized to be based on the Science Based Targets (SBT) initiative as targets that limit the average rise in global temperatures to well-below 2°C above pre-industrial levels aligned with the Paris Agreement.

In order to reduce CO2 emissions, the Group is introducing various energy-saving facilities at our manufacturing plants, such as LED lighting and lighting with motion sensors. In addition, at some manufacturing plants, besides installing solar panels, biomass boilers, and heat pump facilities, we are also reusing heat energy. In FY2021, 97 MWh of electricity was generated in total by solar panels installed at our R&D center “the WAVE” and NISSIN FOODS PRODUCTS Shiga Plant. Furthermore, 375 MWh of electricity generated at the Hong Kong and Wing On Plants of NISSIN FOODS (H.K.) and the Wintai Plant of WINNER FOOD PRODUCTS was sold using Hong Kong’s Feed-in Tariff (FiT) Scheme*.
The Group also joined RE100—an international initiative that seeks to achieve 100% renewable energy for business activities—in February 2021. Electricity derived from renewable energy is also being used at the Ibiuna and Gloria do Goita Plants of NISSIN FOODS DO BRASIL since January 2021 and at the Shizuoka and Shimonoseki Plants of NISSIN FOODS PRODUCTS since April 2021.

Containers for instant noodles often have oil residue after consumers finish eating, making them difficult to recycle. They are generally disposed of as burnable waste. To address this, NISSIN FOODS HOLDINGS began using electricity generated by incinerating waste, allowing for resources to be used effectively. Since March 2020, 50% of the electricity used at the Tokyo Head Office of NISSIN FOODS HOLDINGS comes from electricity generated by incinerating waste.

To prevent fluorocarbon leakage, the Group conducts simple inspections and periodic inspections performed by external specialist organizations in accordance with the Fluorocarbon Emission Control Law. Also, we are incrementally switching to natural coolants toward completely eliminating the use of HCFC specified chlorofluorocarbons such as R-22 coolants.

The NISSIN FOODS Group is working to achieve zero emission status by reducing product loss that occurs in production processes and promoting recycling. Food residues, which make up the bulk of waste from our plants, are reused in animal feed and as fertilizers. We are also reducing sludge by improving wastewater treatment facilities and recycling mixed waste. At production plants in Japan, achieving waste recycling rate of 99.5% or higher each year up till fiscal 2031 is set as a Medium-Term Environmental Target.

As part of reducing the environmental impact of packaging, the Group adopted the Basic Policy on Environmentally Friendly Container and Packaging Design. Under this policy, we contribute to the creation of a recycling-based society by reducing, reusing, and recycling resources (the 3Rs).

Since 2017, NISSIN FOOD PRODUCTS has been selling the OWAN DE TABERU CUP NOODLES which is a set combining a small amount of noodles with ingredients. It can help reduce domestic waste after eating as it allows the taste of CUP NOODLES to be enjoyed by using small bowls found at home and just pouring hot water. Currently, in addition to CUP NOODLES, CHICKEN RAMEN and DONBEI have also been added to the OWAN DE TABERU series.

Reducing the use of plastic containers and packaging

Based on our Basic Policy on Environmentally Friendly Container and Packaging Design, the Group works on reducing the weight and use of containers as well as undertakes research and development of packaging with less environmental impact toward reducing the use of petroleum-derived plastics.
In our environmental strategy EARTH FOOD CHALLENGE 2030, we have set the target of “Complete with Green Packaging” and established new numerical targets related to environmentally friendly containers and packaging. We will promote the Group’s alternative material technologies and efficient use of limited resources toward achieving the targets. We can expect contributions toward the spread of renewable energy in society and promotion of recycling systems in the future through accelerating such innovation related to containers and packaging.
Since January 2019, NISSIN FOODS HOLDINGS has been participating as a secretary company in the Clean Ocean Material Alliance (CLOMA), a public-private collaboration organization that undertakes the sustainable use of plastic products and development of alternative materials.

In June 2021, NISSIN FOOD PRODUCTS abolished the plastic sticker for closing the cover of CUP NOODLE. This allows us to reduce the use of plastic raw materials by 33 tons annually. Together with this, we are progressively switching to a new double-tab cover that allows the cover to be properly closed without a sticker.

NISSIN FROZEN FOODS has nearly completely phased out the use of plastic trays in the noodle products of its proprietary brand. For pasta and yakisoba products, it is reducing the amount of plastic used in packaging materials through the complete elimination of liquid sauce packages by placing liquid sauce directly on top of the noodles and rapidly freezing it.

Example of reducing the quantity of plastic used in FY2021

Using paper containers
We are increasing the usage rate of paper containers as an initiative to increase the use of packaging that can be recycled. Since 2008, NISSIN FOOD PRODUCTS has been using paper—a renewable resource—in CUP NOODLES containers (the ECO Cup). In December 2019, we started using the Biomass ECO Cup which has even less environmental impact. We are also promoting the use of ECO Cups in overseas regions. After commencing its use in China in 2009, we have been expanding this initiative to America (2015), Asia (2016), and Europe (2017). 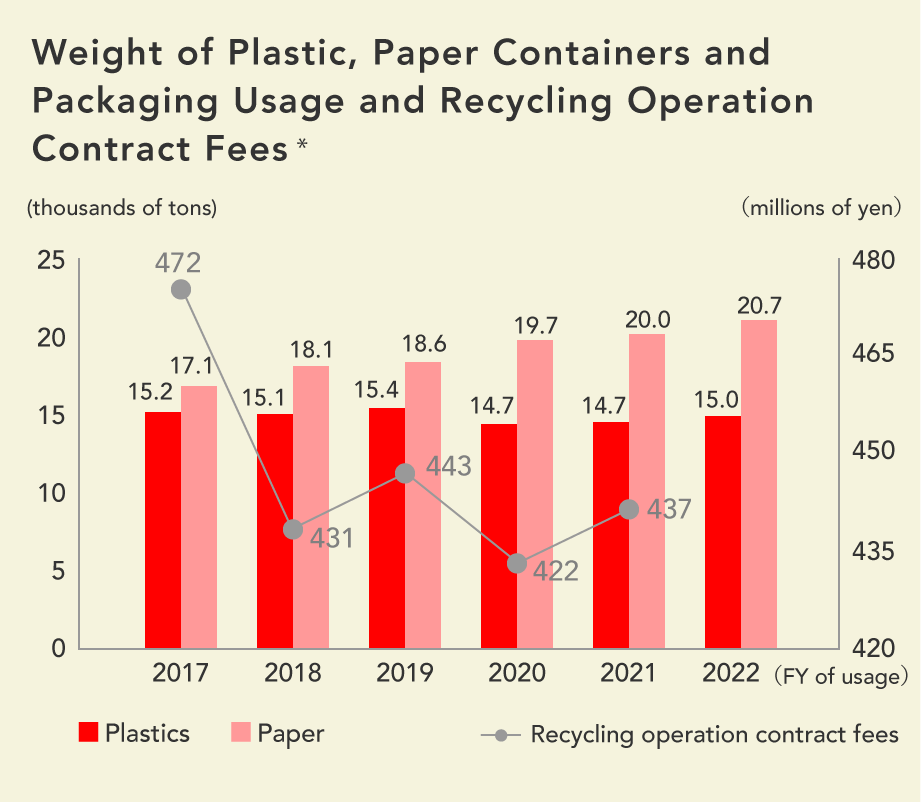 In Japan, companies that use packaging materials are obligated to recycle packaging materials under the Containers and Packaging Recycling LAW. NISSIN FOOD PRODUCTS, MYOJO FOODS, MYOJO FOODS, NISSIN FROZEN FOODS, NISSIN CHILLED FOODS, NISSIN CISCO, NISSIN YORK and BONCHI outsource the recycling of plastic, paper and other materials from containers and packaging to the Japan Containers and Packaging Recycling Association, and pay recycling operation contract fees for the items recycled in accordance with the weight of products manufactured and sold. Collected recyclable materials sorted from municipal household garbage are used to produce such things as pallets, imitation wooden logs, benches, and reconstituted paperboard by recycling companies.

Almost all cardboard essential for packing products can be recycled. It is generally said that the collection rate in Japan is at least 95%.
The Group has also made the cardboard used in packaging materials smaller, thereby reducing the amount of cardboard used. In addition, we strive to reduce the amount of cardboard used by adopting an alternating top-up, top-down configuration which allows the same number of products to be packed in smaller cases.
To make effective use of limited resources, the Group promotes the use of cardboard made from FSC®-certified paper. FSC® certification is a system where third-party agencies certify that the packaging material contributes toward the conservation of sustainable forest resources, is 100% recyclable, and is friendly to the environment.

Example of reducing the quantity of cardboard used in FY2021

The Group positions the Industrial Waste Manual as an important set of regulations for the Group. Domestic group companies outsource disposal of industrial waste to disposal contractors in accordance with this manual. When outsourcing this disposal work, agreements with industrial waste disposal contractors are always based on the format stipulated by the NISSIN FOODS Group. We also check and assess contractors’ sites using our own contractor checklist.
Details stated in agreements are checked by the Legal Division or Environmental Promotion Division of NISSIN FOODS HOLDINGS before being signed by manufacturing plants. In addition, waste manifests, waste quantities, and other data are regularly forwarded to the Environmental Promotion Division for double-checking.

Waste materials of products are in principle collected by packer trucks. If not, they are collected using standard trucks with members of our staff present at all stages from collection and transportation through to arrival at disposal sites. The photographs showing the material being incinerated or crushed must be retained for five years, together with the manifests.

Manufacturing plants of the NISSIN FOODS Group are working to reduce the use of water necessary for manufacturing processes and to reuse water for cooling in manufacturing processes for washing equipment or other purposes.
In addition, the Kansai Plant of NISSIN FOOD PRODUCTS is reducing its water use by introducing AI into water treatment processes. Conventionally, the operator determined the number times and hours of washing the water treatment equipment (filtering machine), and washed them by hand. By using AI to determine frequency and time, and by using automated washing, it is possible to minimize the amount of water used for equipment washing.
Our goal for water usage is 12.3m3 per JPY 1 million in sales (IFRS standard) by FY2031 (11.3m3 in FY2021).

Each NISSIN FOODS Group plant has set voluntary standards more rigorous than those stipulated in regulations and ordinances for sulfur oxides (SOx) and nitrogen oxides (NOx), causes of air pollution, and for biochemical oxygen demand (BOD) and chemical oxygen demand, indicators of water pollution, and each plant monitors the values of these indicators. Also, we have formulated an emergency response procedures manual to prepare against damage to plant facilities and outflow of environmental pollutants into the surrounding area and periodically conduct drills that envision emergency situations. There were no major pollution-related accidents or lawsuits in fiscal 2021.